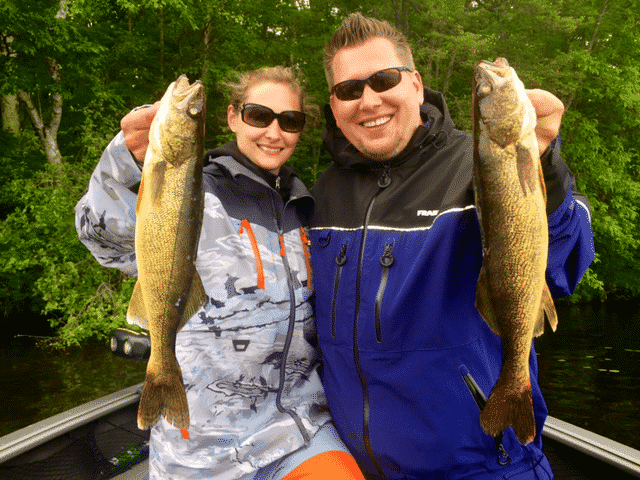 Rain, Rain, and more rain… Not sure I remember a weather pattern quite like this in recent history. Cool temps and lots of falling liquid has dominated our week, but the late spring/early summer bite continues to set up regardless. Weed growth is progressing, and we’re starting to see “normal patterns” for this time of year with a good mixed bag bite arriving on schedule. A little more sun would be nice however. Just sayin… The Custer boys returned on Sunday to the Hayward area. Ken (Elk Mound, WI), Doug (Chippewa Falls, WI), and Darryl (Elk Mound, WI) wanted a day of action, and boy did they get it. SE winds and cloudy skies had the fish in a hungry mood as we caught bunches of walleyes up to 18″, smallmouth up to 20″, pike, and perch. Ken even landed his personal best 34″ musky while we worked shallow weed beds in 4′ – 7′ of water with jigs/minnows & leeches under slip bobbers. It was one of those days where you could do no wrong, and every spot had active fish. These guys deserved it, and it was fun watching watching them put fish after fish in the net. Water temps held around 70 degrees, and I suspect looming storms had something to do with the action we had. The Custer gang performed as advertised, and it was a pleasure as always. Looking forward to our next trip fellas! 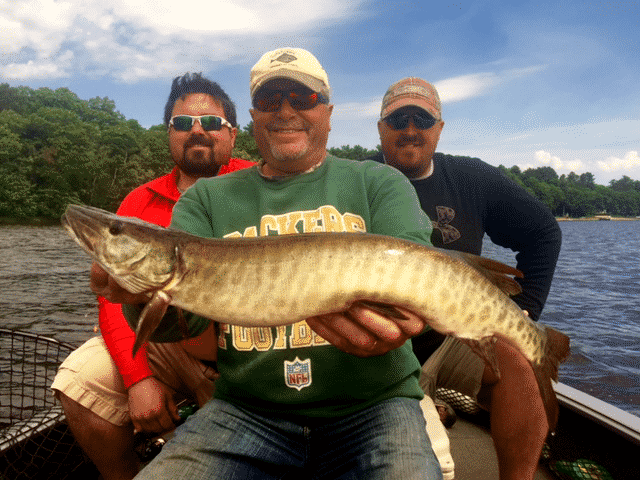 Big rains hit northern Wisconsin on Sunday night, and Monday presented some challenges. Mylo Gustafson (Maple Grove, MN) and his son Cory (St. Paul, MN) returned to fish Chequamegon Bay, and this year they brought along Cory’s brother Brian from Austin, TX. When we arrived at the landing, I knew we were in trouble. After checking out two spots, my suspicions were confirmed. Incredible runoff had turned the bay into an absolute mess of muddy water with floating debris everywhere. Time to move! We headed inland, and targeted a mixed bag of walleyes, smallmouth, and pike in a gloomy, misty, and cool day with water temps in the mid 60’s. I even had my long underwear on! We found fish but worked for every one that was put in the net. Mylo and his boys did well with every opportunity, and we landed walleyes up to 18″ and smallmouth up to 18″ along with several small pike. Jigs/minnows were the best presentation we found with a few fish coming on leeches. This was a classic example of making lemonade out of lemons, and the Gustafsons represented themselves well. Hey, everyday isn’t puffy clouds and puppy dogs! Kind of wish it was though… See you next year boys, and we’ll try to dial up a little warmer weather for you!

John Jatzow along with his boys Andy and Greg all from Iron River, WI were back with me in the Hayward area on Tuesday, and we were on a mission to catch fish without an agenda. My kind of day! Cloudy skies with east winds after another night of rain had me suspicious, but the fish didn’t seem to mind one bit. We had a steady bite throughout the day and caught a pile of walleyes up to 18″ and pike up to 32″ with water temps reaching 68 degrees in the afternoon. Leeches and minnows equally produces on jig and slip bobber presentations in 5′ – 8′ of water in new weed growth. The Jatzow gang is a fun bunch, and we had lots of laughs while reeling in lots of fish. Greg claims that this is the only day of the year he fishes, but I’m not sure the rest of us are on board with that. He was a fish catching machine, and I’m thinking we might have had a “ringer” in the boat… Keep an eye on that guy John and Andy. Way too many hook sets to be a rookie! I had a great time guys and can’t wait to do it again!

Craig and Holly Toycen from Bloomer, WI arrived for a relief mission on Thursday with my newly repaired truck from Bloomer Ford. Our fishing trip lined right up with some needed maintenance, and Craig’s crew was able to get the job done in time for an ideal swap. Why am I not surprised? We fished the Hayward area, and our first stop wasn’t exactly what we had in mind. Holly landed a dandy 32″ pike, but the walleye bite wasn’t happening. Time to get… Lake #2 was better, but the bite wasn’t on fire by any means. We bounced from spot to spot and caught plenty of walleyes up to 19″ and a few pike, but you had to keep moving to keep the lines tight. It was a funny bite with lots of short hits and misses. We fished weeds in 5′ – 6′ of water, and jig/minnow combinations were the best presentation with a few fish coming on leeches with slip bobbers. Water temps crept into the high 60’s, and we had a mixed bag of weather that included everything from clouds, sun, wind, and rain, to cool and hot. Gotta love Wisconsin weather… The Toycens are always a blast to fish with, and I look forward to this trip every year. Good times and good stuff. I’ll give you the good pole next time Craig! If you’re looking for a new vehicle or have maintenance issues, give Craig a call at Bloomer Ford. They’re the best! 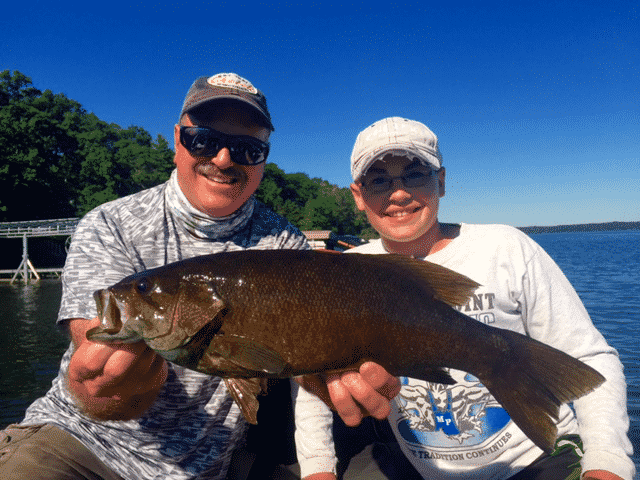 Scott and Wyatt Evans returned on Thursday for Day #1 of their two day annual trip. Even though they aren’t relation, they should be! Wyatt’s fishing accomplishments have been well documented in my reports over the years, and I’m proud to say that he just keeps getting better. Man this kid can fish! We started the day in the Hayward area fishing walleyes and found them in a bit of a stubborn mood, but the action was consistent enough to put plenty of fish up to 18″ in the boat along with a few small pike. The cloudy/rainy weather system that was stuck over us over the past several days finally decided to move on, and we had high skies with light winds and water temps in the high 60’s. Jigs and minnows performed best in 5′ – 8′ of water and weeds. With dinner in the box, we decided to switch lakes in the p.m. and focus on smallmouth. It took us awhile to put it together, but we caught a bunch of nice fish up to 20″ on crank baits in 4′ – 8′ of water. Scott put on a clinic, and it’s obvious that Wyatt has had one heck of a teacher. The spawn appears to be all but done on most of our lakes, and the post spawn feed is on. Top waters, crank baits, and plastics will all have their place over the next few weeks, and keep switching presentations until you figure out the bite of the day. Bad news for the smallies on Chequamegon Bay… Wyatt is on the way. Have a great weekend everyone! 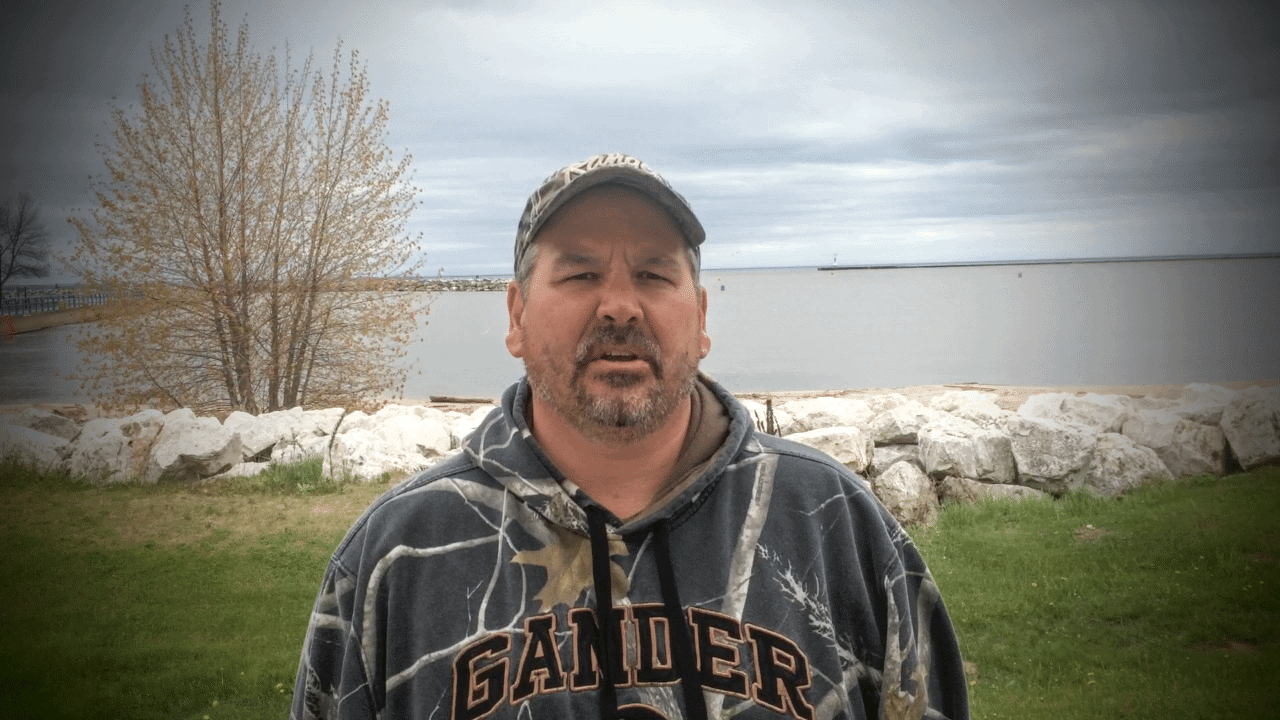 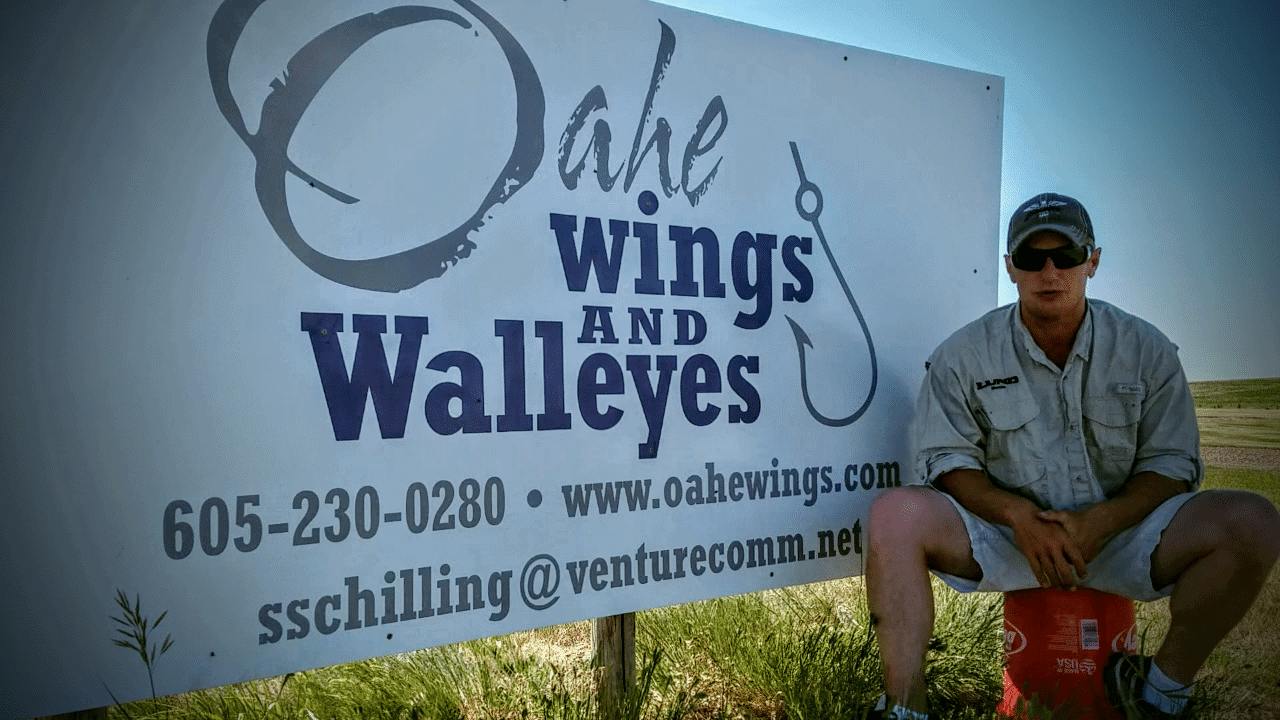 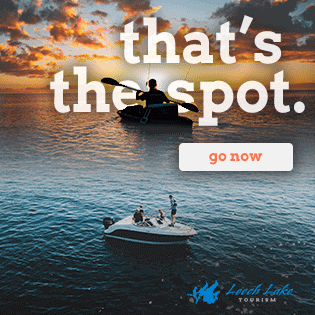