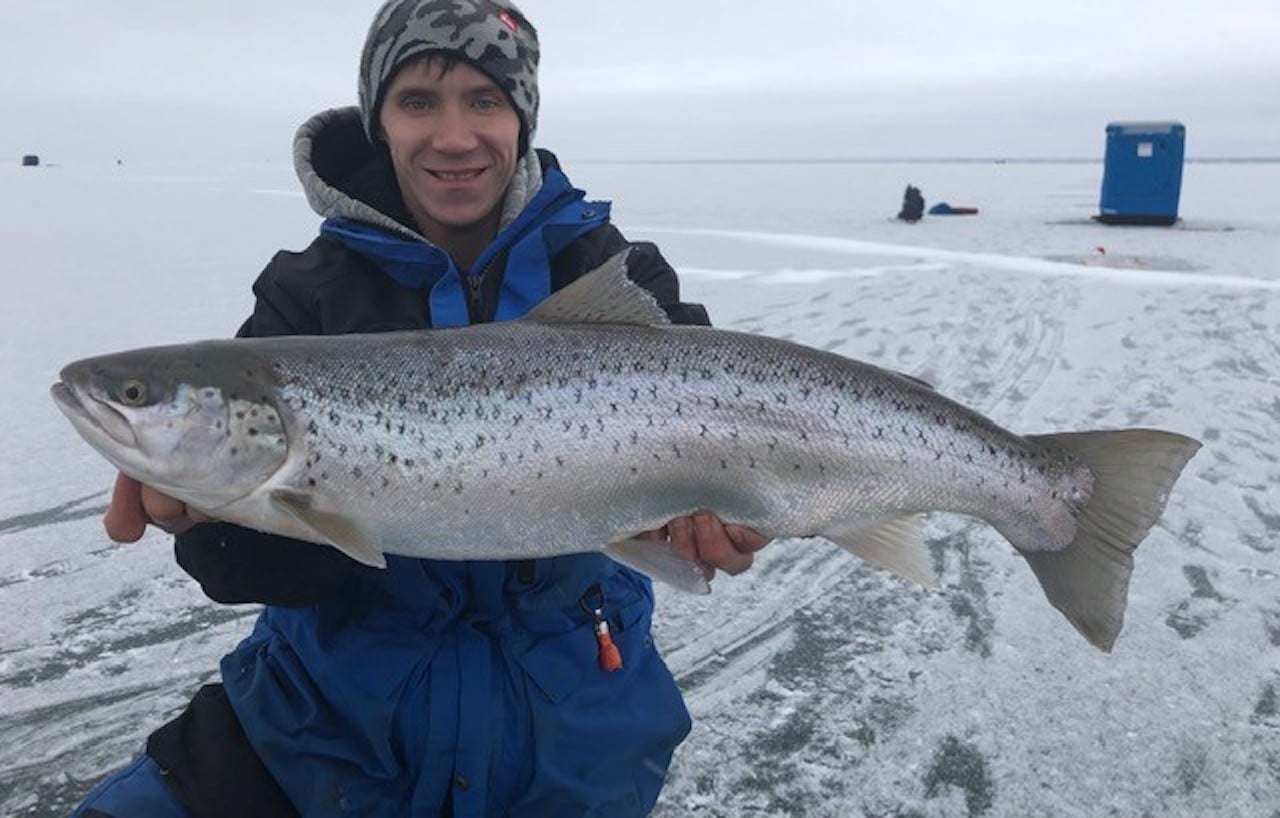 Even though the days are getting longer, winter is definitely finally setting in around northern Wiscsonsin. Below zero temperatures and the lack of snow throughout much of our region are definitely assisting in ice making efforts especially on Chequamegon Bay. With not much of a warm up in sight, we should be able to start exploring new ground on the big water. Football season is winding down, and there won’t be much of a reason for you couch potatoes to stay inside. Josh Teigen, Erik Thue, and Aron Kastern sent in their latest updates, and here’s what they had to say.

Josh Teigen has been covering a lot of water lately combining inland trips along with days on Chequamegon Bay. He says the inland panfish bite has been “fantastic”. His crews are icing big numbers of crappies, gills, and perch targeting deep basins in 25′ – 35′ of water. Fish are suspended anywhere from 2′ – 10′ off bottom with small jigs and spoons tipped with waxies being the most reliable presentation. Tip-ups baited with suckers or shiners in and along weeds are also catching a few pike throughout the day. The inland walleye bite has been a struggle however with not much at all happening. Go with the flow, and target what’s eating. Inland ice conditions are perfect with over a foot of ice, no slush, and very little snow. After finally making it to Chequamegon Bay, Josh located a good mixed bag bite including whitefish, browns, splake, and lakers. Fish have mainly been in 20′ – 35′ of water with Kastmasters, Hyper Rattles, & Rippin Raps all producing. Tip your jigging presentations with a minnow head to up your odds, and set a few tip ups with shiners for bonus fish as well. Josh says you’ll find 10″ – 12″ of ice in front of Ashland and 6″ – 7″ in front of Washburn. Check ice depths as you go if fishing around Washburn as there’s been a lot of new ice forming lately. Well that’s more than enough to keep someone busy… That’s a man on a mission. Nice work Josh!

Erik Thue continues to keep us up to date on what’s happening in the Hayward area, and he reports that cold temperatures are really adding to ice depths. He’s finding close to 15″ in some areas. Walleye fishing has been inconsistent with a few bites coming during low light periods. You might be able to scratch out a few if you stay mobile, and pick the right weed edge or rock point to set up on. Spoons and Jigging Raps or Hyper Glydes tipped with a minnow head continue to be top producers, but make sure you also have a couple of dead sticks or tip ups rigged with a shiner to cover more area. The panfish bite has been much more reliable with deep basins still trending as the most likely place to locate fish. 22′ – 26′ has been the sweet spot, but don’t be afraid to explore deeper depending on the lake. Erik says that a lot of low barometric pressure over the past week really helped keep crappies and gills active. He’s been using tungsten jigs tipped with plastics for hungry fish. If your locating fish that won’t jump on a plastic, tip it with a waxie or spike to get bit. Lead jigs are also a good option for super tough biters with a slower fall sometimes being the key. Stay mobile and don’t hunker down until you find fish. The pike fishing around Hayward has been really good lately as well. According to Erik, some “serious” fish have been caught recently. Tip-ups with fluorocarbon quick strike rigs have been the best way to go using large suckers and shiners in 6′ – 12′ of water with break lines and weed edges being the best spots to set up. Sounds like now is the time to catch a big pike. I like that idea… Keep at it Erik. Right on pal!

Aron Kastern and his gang have been camped out on Chequamegon Bay over the last week or so, and he says it’s well on it’s way toward excellent ice conditions. There’s 12″ – 14″ of ice from Ashland to the lighthouse with great travel conditions for ATV’s and just enough snow for sleds to be used also. If running a sled, a good tip from Aron is to make sure you run through patches of snow as often as you can to keep those slides lubed up. The fishing has been a classic grab bag of multiple species which is why the bay is so popular. To narrow your search Aron says to focus on weed beds and breaklines near deeper water, but don’t overlook 20′ plus flats. He’s been dialed in on the flats lately with jumbo perch, browns, cohos, walleyes, and pike all cooperating on any given day. Fish have been aggressive most days with hole hopping being the most productive. If you do run into stubborn biters, Aron says to just stay put and grind it out. Your patience will be rewarded with a good variety of fish. Lots of presentations are working right now. Rattle spoons tipped with minnows or waxies along with along with large vibration baits to target bigger fish are a good place to start. Run your set lines and tip ups rigged with lake and golden shiners close to bottom for perch and walleyes, but don’t forget to set some high in the water column for cruising trout and salmon. From the lighthouse to Washburn and Houghton Point, Aron also says that there’s 6″ – 7″ of ice, and it’s still a check as you go situation. He thinks that traditional whitefish areas should be accessible soon with all of the ice that’s being made, and we may also be able to get on some good lake trout water before too long. Aron’s sleeper shacks are out, so give us a call is you’re looking to spend some time away from home and on the ice. Set those lines and skim those holes Aron. Thanks for the update brother!

I’d say that just about covers it! Big thanks to Josh, Erik, and Aron for keeping us up to speed as always. Those guys work hard to stay on fish, and their reports are always on point. Until next time stay warm, tight lines, and we’ll keep you posted. By the way… Did anyone see that big Badger basketball win? On Wisconsin! 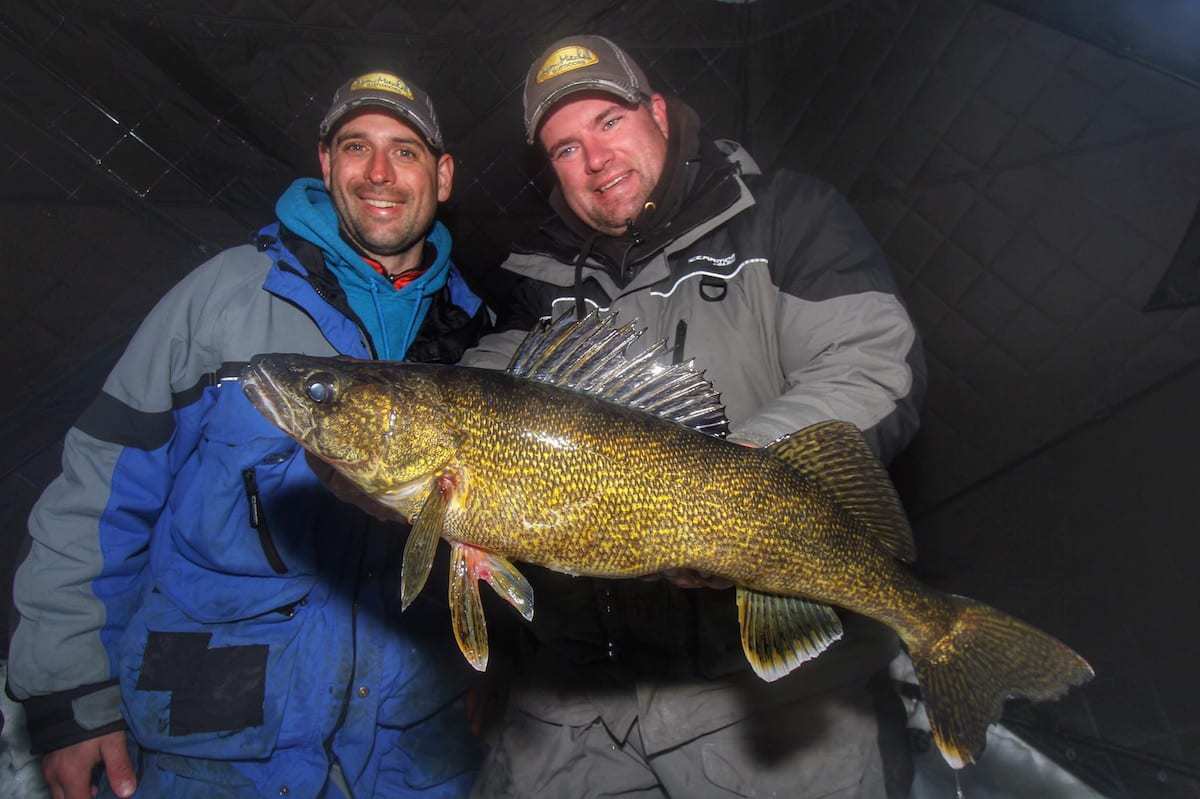