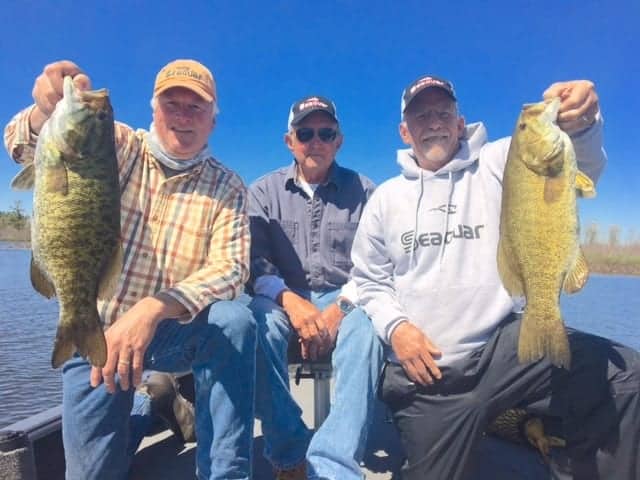 Chuck Reynolds from Mequon, WI booked a trip with us last year. The mission was to fish Chequamegon Bay, but big winds made it impossible. We rescheduled, and he was finally able to make it happen along with his friends Chip Stringer (Mequon, WI) and John Richter (Sayner, WI). Chuck handles the marketing duties for Seaguar, and we were able to put it to the test. We started the day with NE winds, heavy fog, and the fish were funky. We’d have some fast flurries of action with lots of short hits and misses. It was a struggle to put a pattern together as we threw a variety of jerk baits and plastics. The highlight of the morning was when Chuck tangled with a fat mid 30’s pike that made it to the net after smashing a jerk bait. It was quite a battle, but the Chuck played the fish well on light tackle and put it in the net. Heck of a fish! After lunch we moved to some different water. The fog finally burned off, and the sun came out. After a bit of searching we found a current area with a bunch of small minnows and a pile of feeding smallmouth. Game on! They guys worked them over well and put a bunch of good smallies in the net including a sweet double of twin 20’s. They were stacked in 4′ – 6′ of water, and current definitely seemed to be the key to finding feeding fish. Water temps ranged from 58 – 65 degrees. Fun day with fun guys and lots of laughs. They worked for everything they caught, but the results were worth it. Take it easy on those guys Chip… Can’t wait till next time! 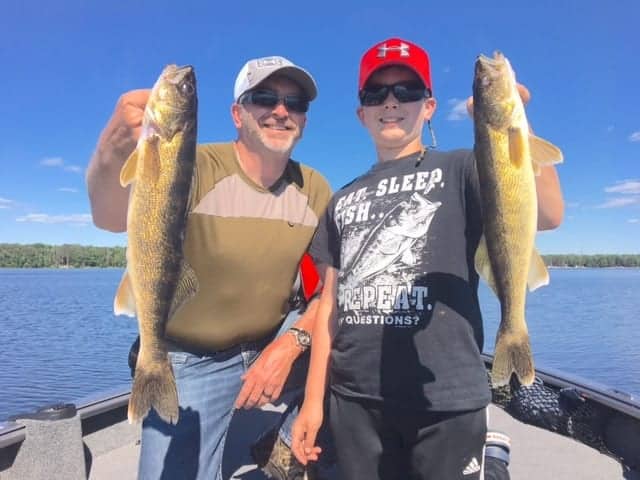 Mark Hayman and his 12 yr. old son Levi from Frederic, WI returned for their annual trip on Tuesday. The weather was perfect, and so was the fishing. Levi has been fishing with us for the past several years, and he’s definitely a guide in the making. We spent our day in the Hayward area and site fished smallmouth in the morning with high skies and flat water. Conditions couldn’t have been better, and my father / son team wore them out catching lots of fish up to 20″ on jigs & plastics over gravel flats in 2′ – 5′ of water. It’s always a treat to site fish our clear lakes this time of year. It’s like looking into an aquarium, and you get to see some really cool stuff. Our first spot of the day had two spawning muskies on it that we watched for several minutes. Thankfully, Mark was quick on his phone and got a couple of cool shots. Hard to beat that! We changed lakes in the afternoon and switched our attention to walleyes. Flat water and sunny skies continued, and the eyeballs were a bit stubborn to start. We worked shallow weeds in 5′ – 6′ of water and would catch a one or two at each stop. After bouncing around a bit, we hit the jackpot at the end of the day. Levi and his dad landed a bunch of fish up to 18″ on jigs and minnows including a super stealth double to wrap up our trip. Levi has “stealth mode” down. They never saw a thing! Water temps ended up in the mid 60’s by quitting time, and Levi declared it our best trip ever. That’s saying something, but it just might have been… Great job buddy. You’re one heck of a fisherman! 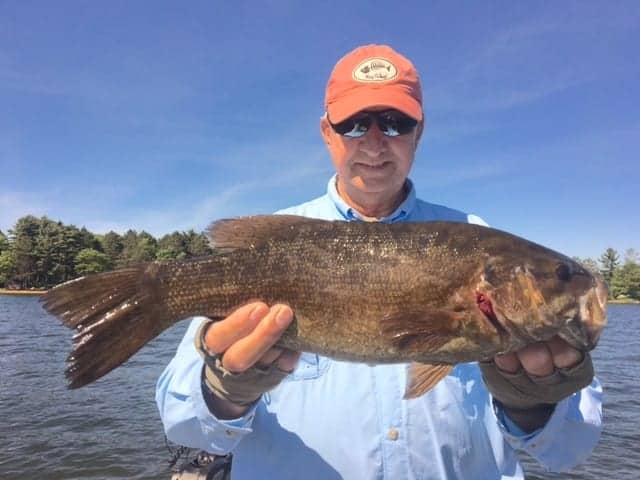 George Hollow (Elmhurst, IL) and Wilbur Mennell (Warrenville, IL) were back for the start of their annual 3 day trip on Wednesday, and day #1 was a success on all fronts. The weather was great and so was the fishing. I definitely believe that we’re making up for all of those crummy conditions in May. Maybe Mother Nature felt bad for us?… We spent our day in the Hayward Lakes area targeting smallmouth and used a variety of methods. In the morning we began casting top waters and plastics over spawning flats boating a few and losing a few. After looking around, it was evident that there was a lot of spawing going on. Lots of nests had males and females on them, so we left them alone to take care of business. After the wind kicked up a bit we drifted over a rocky flat in 5′ – 6′ of water and tagged a few nice fish on jerkbaits including a slammer 21″ fish before lunch. In the afternoon we kept searching and eventually found a good spawning flat with aggressive fish. Wilbur and George wrapped up the day in grand fashion landing a bunch of fish up to 20″ on jigs and plastics. Perfect ending to a perfect day. Couldn’t have been better! Water temps hit 70 degrees, and things are definitely moving forward on our lakes. We saw a ton of baitfish while moving through the shallows, and there’s plenty out there for those fish to eat right now. Our lakes are coming alive, and it’s a great time to be here. Wouldn’t want to spend it with any other guys! 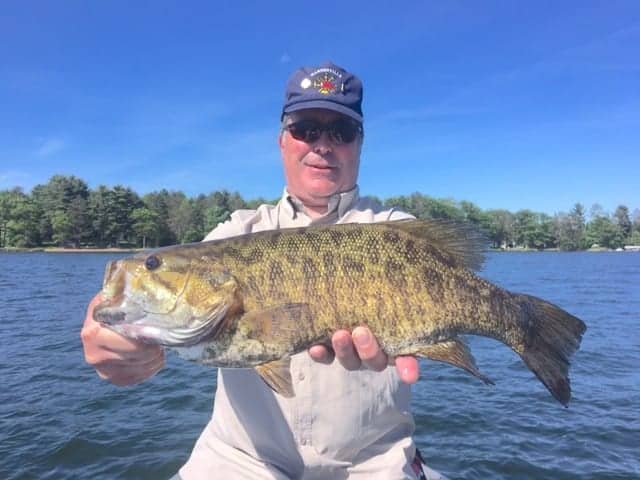 George and Wilbur were back in the boat for day #2 of their trip in the Hayward Lakes area on Thursday, and it was another “Bass O Rama”… We targeted spawning fish in the morning with ideal conditions. High skies and flat water have made my life easy over the past week, and I’m definitely not complaining. We landed a bunch of good fish on jigs and plastics over rock and gravel flats in 5′ – 10′ of water in the morning. In the afternoon we spent a couple of hours searching for a casting bite with jerkbaits and slow sinking plastics. We caught a few in 5′ – 10′ of water, but it wasn’t happening as fast as we wanted. Back to site fishing, and back to some big smallmouth. We ened up the day on a good run and landed some amazing fish up to 19”. George even battled a pirhanna skeleton to the net. My customers have gone rogue on me… You had to be there, but that was as good as it gets. Funny guys!!! Water temps started at 62 and ended at 70 by the end of the day. We still have lots of spawning fish, and it will be interesting to see how long it holds out with the warm weather we’ve had. By the way, If you’re looking for a good pirhanna bite, we’re on it. That was a good one!!! 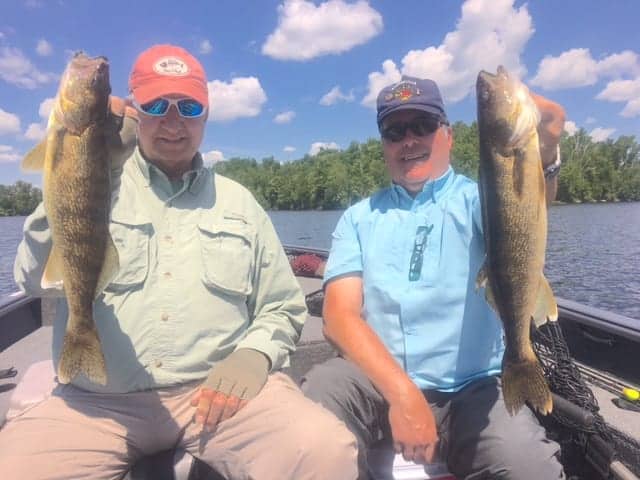 The final day of my trip with Wilbur and George was back in the Hayward Lakes area chasing wallyes, and my crew dialed in another specacular day. I told them to bottle it up because it’s pretty rare to get 3 straight days of the exact weather you want up here. Absolutely stellar weather! Our first spot didn’t produce, but after bouncing around we found a pile of eyeballs in 5′ – 6′ weeds. We just kept moving from weedbed to weedbed until there were biters. Jigs and minnows were the most effective presentation, and my crew put together a big numbers day along with some big fish. George landed a long 26″ spawned out female that was released, and Wilbur was able to take a few fillets home for a fry. Perfect! Water temps soared to the mid 70’s on another warm day, and things are getting a bit steamy for early June. I’m not complaining, but a little cool down might be in order. I said “little”… Thanks to Wilbur and his excellent videography along with George’s superior timing for the Angling Buzz report we put together. Out of retirement boys… You’re hired! We always hate to see these guys leave. They knocked the heck out of the fish over the past three days with lot’s of laughs and lots of fun. See you next year fellas. Can’t wait!

Huge winds moved into our area on Saturday. Unfortunately, my annual trip with Dan Fenske and his family had to be cancelled. Our streak of good fortune with the weather came to an end, and I was sorry to miss out on seeing the Fenskes. We’ll make that musky trip happen Dan, and I’m already looking forward it! The winds are supposed to calm down tomorrow, and we’ll be back on the water to start working on our report for next week. Lots of good stuff happing out there right now. Explore it, and enjoy it! 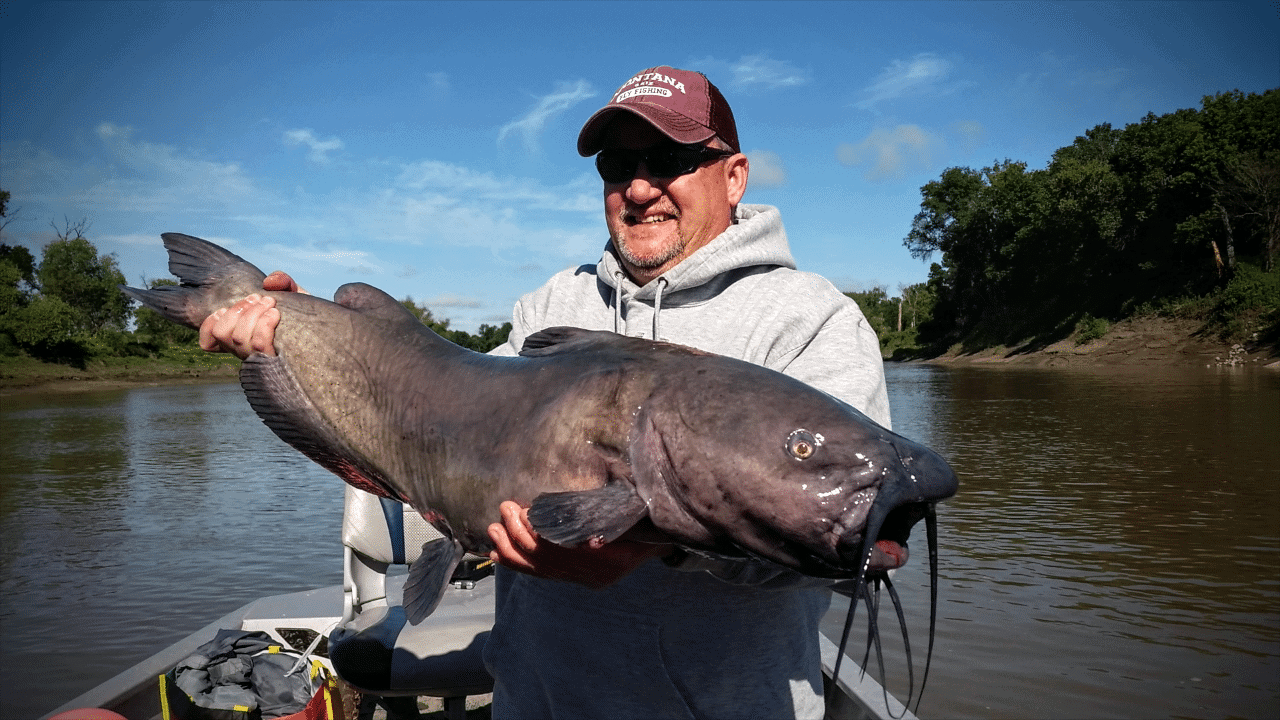