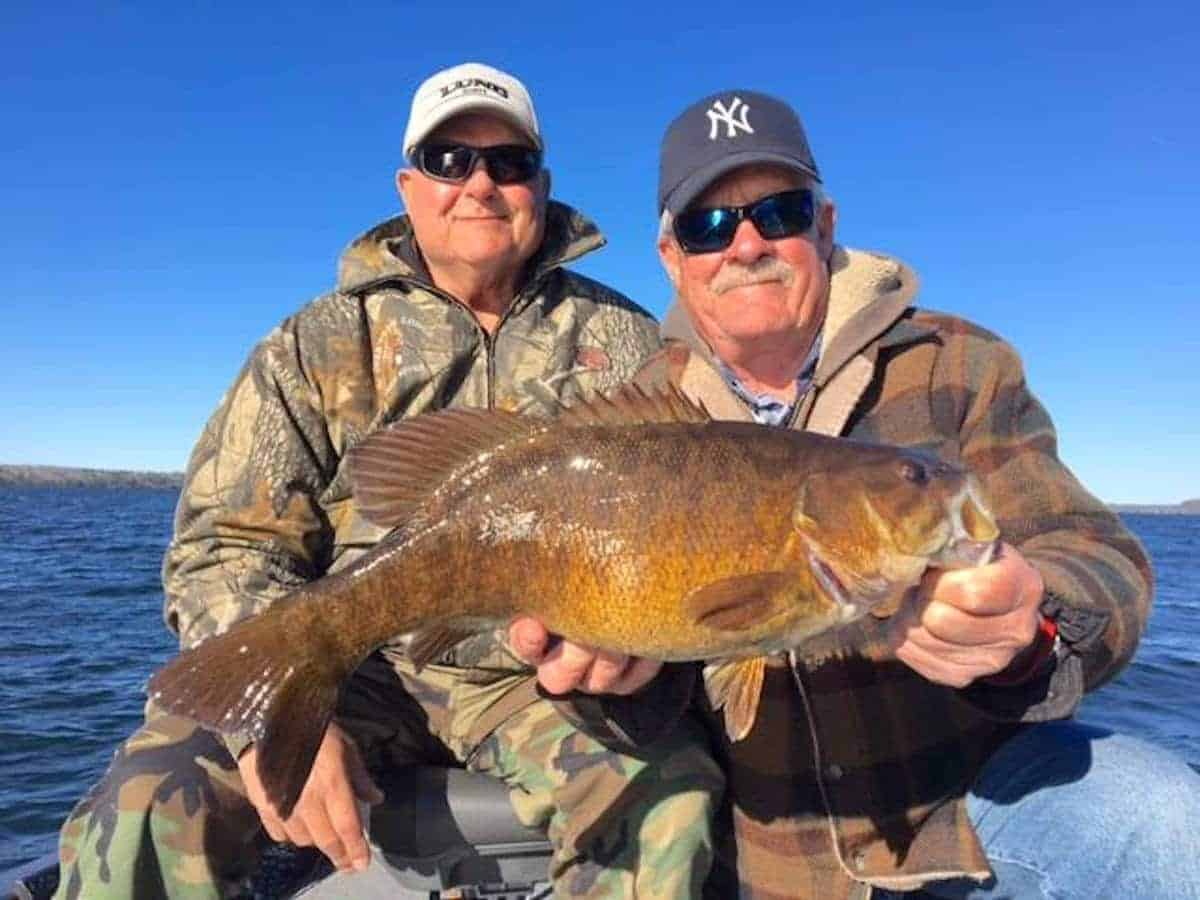 Our first week of the 2017 season is in the books, and we’ve got a lot to report. Opening weekend is always spent with my father Jim and partner Terry Peterson. Our first choice is usually Chequamegon Bay depending on the weather, and we were able to get out there despite strong east winds and cool conditions. Our morning bite was slow finding a few smallies in 5′ – 6′ using suspending stick baits. We threw the tackle box at them, but that was the only thing producing. Water temps to start the day were 48 degrees. Our afternoon was a different story however. Winds laid down and water temps rose into the low 50’s. Perfect! Slow sinking plastics became the bait of choice, and it was game on. Terry and dad had them dialed in. We caught a pile of nice pre spawn fish up to 20″ relating to wood in 4′ – 6′ of water to finish out the day, and our numbers of fish caught turned out better than expecetd. It was a “hang with it and keep moving” day for us. We certainly couldn’t complain about the results, and everyone agreed that we’re off to a good start! 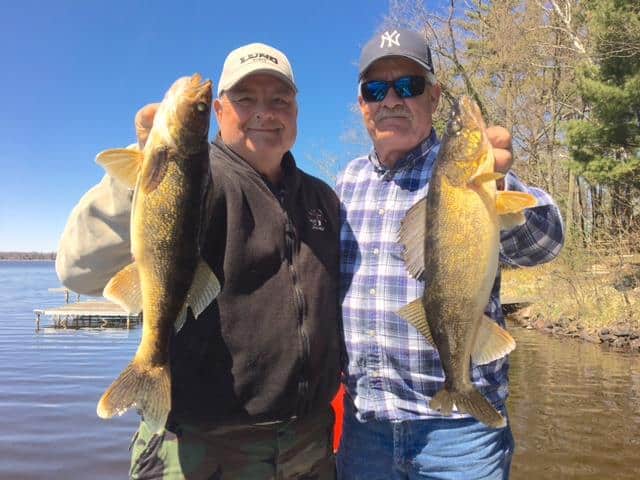 Sunday was spent in the Hayward Lakes Area, and we were in search of walleyes. Early seaon eyes can be a bit tricky, and we weren’t exactly sure what circumstances we’d be facing with the early ice out. Conditons weren’t ideal with northeast winds and water temps in the low 50’s. We began the day throwing stick baits in shallow water without any success. After moving deeper, we were able to connect with a bunch of nice fish on jigs and minnows in 15 – 16′ of water. Electronics were key, and we didn’t stop until fish were marked. The presentation was slow, the bite was light, but the fish were there. After an amazing lunch at Angler’s Haven it was time to inspect another lake. We wrapped up our opening weekend with a few pre spawn smallies that hit suspending stick baits in 8′ of water as well as a bonus musky that slammed Terry’s bait right by the boat. Awesome way to end an incredible weekend with two of my favorite guys! 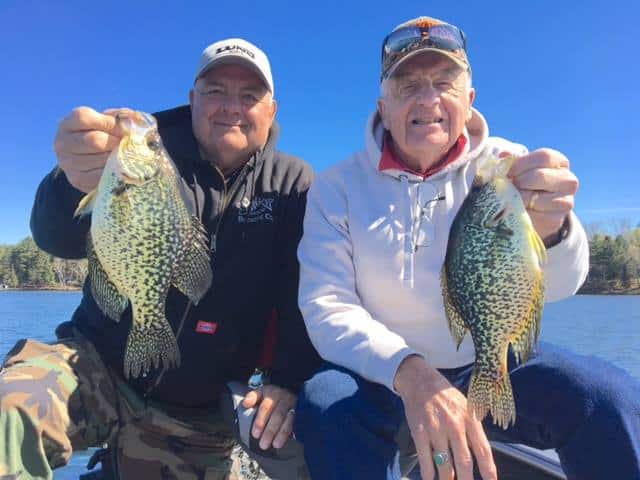 North winds moved back into our area later in the week, and I had a bit of time to do some exploring before the spring push arrives. My Dad and friend Bill Lindsey from Iron River, WI joined me on a scouting mission, and we had less than ideal circumstances. A cold front and NE winds met us at the landing of our first stop, and the bite was predictably tough. We found fish in anywhere from 4′ – 13′ of water, but they weren’t overly cooperative. Bites were slow to come as we fished plastics under slip bobbers. After putting a few fish in the boat up to 12″ we decided to switch lakes. The result was the same. Catch a couple and move was the name of the game. Hey… It’s not always easy! We moved around a bunch and caught enough to send Bill home with a few fillets for dinner. Finding weed growth has been the key to locating active fish this spring. No weeds, no fish! Nice work in tough conditions today gentlemen. It was a pleasure!!! 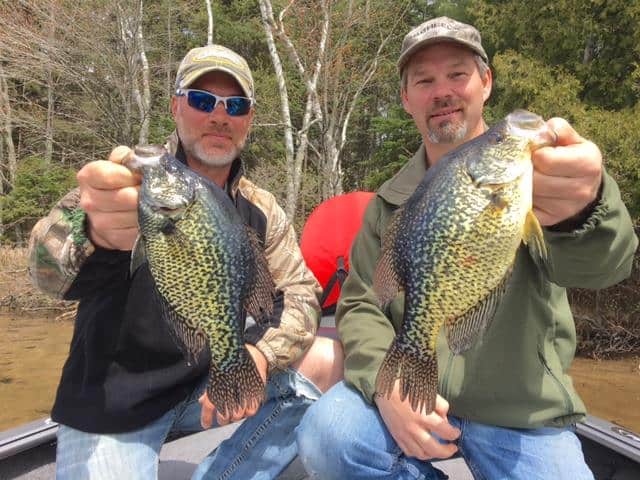 New customers Duane Frank (Fall Creek, WI) and his brother Doug Frank (Menomonie, WI) spent Friday in my boat chasing crappies, and I was pleasantly surprised with our results. Wind conditions in the Hayward area switched to the west, and the fish began to bite. Funny how that works! Duane and Doug clobbered a bunch of big pre spawn fish in 9′ of water that were staging to spawn. The brothers hit it just right, and it was one of those days you wish everyone could experience. Dialing in the right depth and presentation took some time, but once we figured that out there were tight lines in the boat throughout the day. Fish up to 14″ were riding high, and we had our slip bobbers with plastics set around 3′. It doesn’t take much of an adjustment to make a difference. When they get finicky, check your depths! It was a fantastic day with awesome weather, and some really good guys. Can’t wait to do it again fellas. We’ll get that 16 incher next time!

Best wishes to all of our friends in Minnesota fishing their opener this weekend. I can’t wait to see the fish that were caught and hear the stories to go along with them! 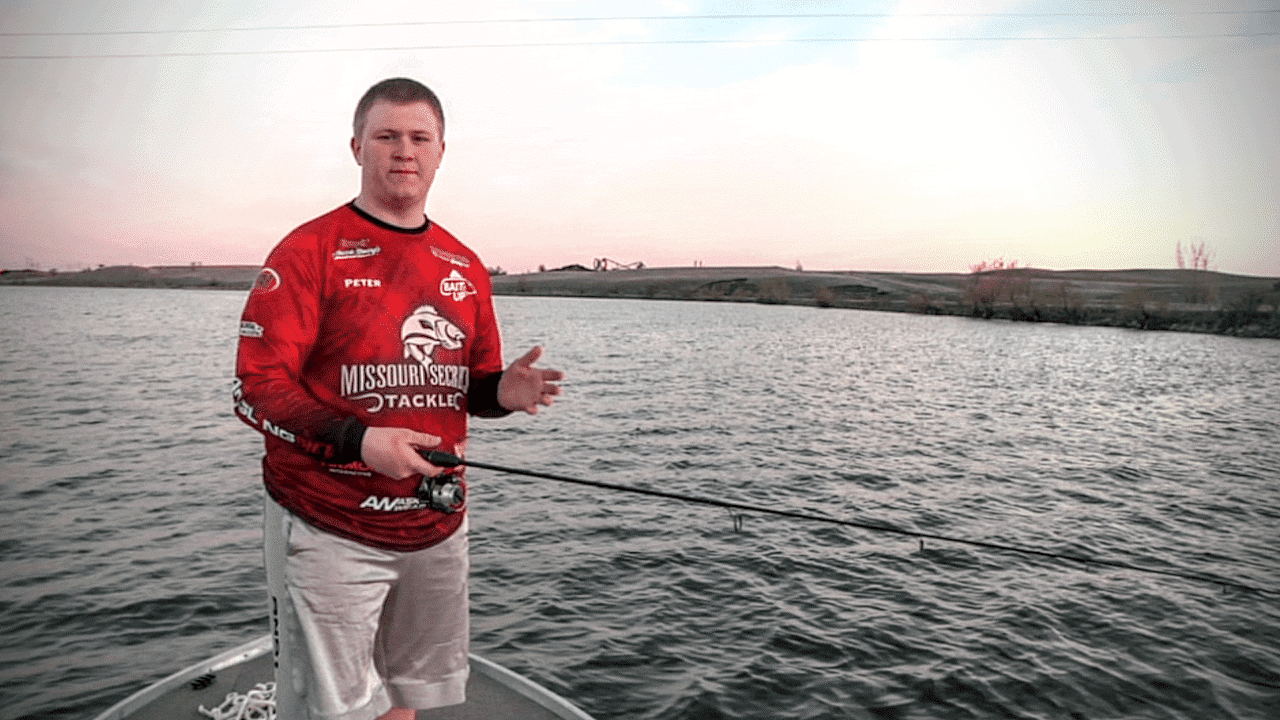